Hi-Fi music streaming has long been a niche segment. After the paradigm shift from analog to digital in the mid-2000s, there was much hesitation among audiophiles to switch to streaming services for Hi-Res Audio while they could buy (or pirate) the FLAC lossless files instead. While the general perception of lossless music streaming services has now changed – thanks to the arrival of services such as TIDAL, Deezer HiFi and Amazon Music HD – Spotify is a notable player that has never shown any interest in hi-fi streaming. 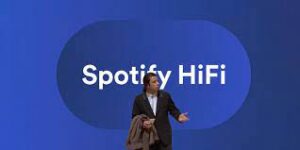 But where is Spotify HiFi?

During his announcement, Spotify promised to roll out Spotify HiFi in “select markets” later this year. Nine months later, 2021 is coming to an end and there is no word on the availability of Spotify HiFi. We were hoping the streaming giant would launch HiFi as a Christmas surprise (but it didn’t), and it looks like the company isn’t delivering on its promise.

Spotify’s inability to launch HiFi is obvious, mainly because of the popular Spotify alternative Apple music. Unlike Spotify which announced HiFi in February and still hasn’t rolled out a public beta, Apple Music announced Lossless and Hi-Res Lossless audio alongside Spatial audio in May and began rolling out the feature in June. Wider availability and Android support came in July. The best part? Lossless and Hi-Res Lossless audio from Apple Music are provided at no extra cost.

On the other hand, we still have no clarity on whether Spotify HiFi will come as a separate tier or at no extra cost to Spotify Premium users. Spotify’s press release states that “Premium subscribers in select markets can upgrade their sound quality to Spotify HiFi”, leading us to believe the so-called ‘upgrade’ could cost more. Given the recent price increases and the fact that competitors offer Hi-Res streaming (24-bit/192 kHz) at no additional cost to subscribers, Spotify will find it difficult to convince customers to pay extra for HiFi.

What is delaying the Spotify HiFi release?

From what we can see from the outside, the delay in the Spotify HiFi release does not appear to be a technical issue. That’s because the behind-the-scenes feature seems to have been ready for a while. In fact, users on Reddit accidentally seen the HiFi menu and managed to record the onboarding flow also.

Spotify HiFi lag doesn’t seem to be a technical problem

One possible reason why Spotify is facing hurdles could be because of partner OEMs. As a reminder, the company said it was partner with speaker manufacturers to make Spotify HiFi available through Spotify Connect. Given the supply chain problems caused by the pandemic, the associated Spotify HiFi speakers may not be quite ready for prime time yet.

In addition, many consumers have now moved away from wired earphones and headphones and picked up AirPods or their alternatives for a wireless and hassle-free experience. TWS earbuds are all the rage right now, and not many of them support the necessary technologies for lossless streaming. This could be another reason why HiFi is not the top priority for Spotify right now.

Another possibility why Spotify HiFi is still not available could be due to a perceptible change in priorities. As you may know, Spotify has been paying a lot of attention to podcasts lately and has struck deals with high profile personalities like Joe Rogan and Michelle Obama. While unlikely, podcasts and podcast-focused features would have forced the company to put Spotify HiFi on the back burner.

And let’s not forget the complex world of music licensing agreements. Spotify may face hurdles with leading music labels to kick-start the transition and expand deals. The streaming giant is no stranger to such hurdles, as we’ve already heard (and seen) music labels holding Spotify’s expansion in India hostage for nearly two years. A huge part of the Spotify library missing in India due to a licensing issue with Warner Music Group.

Since Spotify is surprisingly silent about the existence of Spotify HiFi, these are all speculation for now and we have no official word on what exactly is causing the delay. Spotify has not responded to our request for an official response at the time of writing this article.

What Spotify can do now

Often regarded as a company that takes community feedback seriously, the least Spotify can do right now is share an update on the current status of Spotify HiFi. Even if it’s delayed, possibly until next year, revealing the updated timeline will help customers decide whether to wait or switch to competing services like Apple Music, Qobuz or TIDAL.

Some of Spotify’s greatest strengths are undeniably its cross-platform availability and Spotify Connect. Example: While you can download Spotify from Microsoft Store on Windows and download music offline, you should either stick with the outdated iTunes, Apple Music web player or enable the Windows subsystem for Android nasty use Apple Music on Windows 11 for offline downloads if you jumped ship HiFi streaming and are not part of the Apple ecosystem. Since Spotify is strategically positioned as a service not limited to an ecosystem, HiFi availability should help retain users and potentially attract new users.

Spotify still has time to turn the tide if it releases HiFi in time for New Years at no extra cost, possibly in addition to Spotify HiFi-compatible hardware from partner OEMs. While Spotify hasn’t officially promised or said anything, Hi-Res audio support (24-bit/192 kHz) would be great and justify the delay. It will be interesting to see what the future holds for Spotify in the lossless music streaming space, as only a 2022 release now seems likely.

Where are you streaming lossless audio? Have you already switched to Apple Music/ TIDAL, or are you still hoping for Spotify HiFi? Let us know in the comments. If you’re planning to get started with lossless music streaming, don’t forget to take a look at our list of the best digital to analog converters to play HiFi lossless audio on iPhone and Android.